Archive for the ‘ A Good Laugh ’ Category

Funny HAHA, then a Happy Cry

I stumbled across this last night and literally laughed out loud.

I probably laughed a little too much. 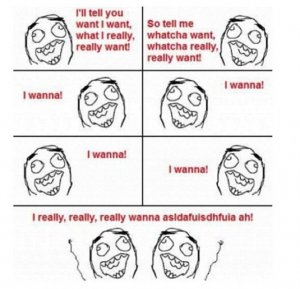 *I do not know where this photo originated, therefore I am unable to give proper credit to whomever deserves it…sorry!

Then a good happy cry came when I was quickly scrolling through Facebook, and 2 different well know bloggers posted the same thing…. the fabulously hilarious Cocktail Deeva & the equally fabulous Bored Mommy Blog.

This made my day. It will make yours too.

HAHAHA…..Ok, maybe a few words need to be said. I found this free app called aLike. It says to simply upload your photo and it will show you your celeb look alike.

Fun! I always stumble when that awkward time comes around on FB where everyone puts their gorgeous celeb doppleganger and I pretend to just stay off FB until it passes.

Side note – why isn’t doppleganger a real word?

Ok, back to wordless wednesday.

Not even sure who this is…nor do I see any resemblance…Oh wait, we both have 2 eyes and a nose! 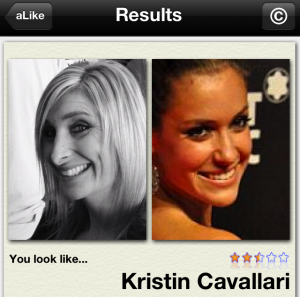 Again, don’t know who this is and see zero resemblance…but I guess we are looking at the camera at about the same angle…?? 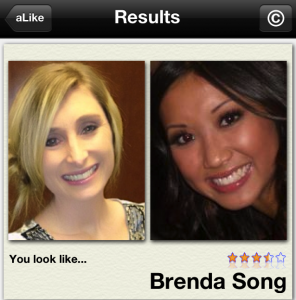 WHAT? Really? I have officially begun to lose hope in finding my true doppleganger…. 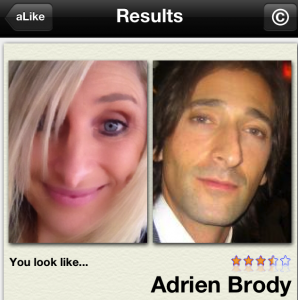 There we go….now we were getting somewhere. I look like a man. Not just any man. Isn’t this the creepy dude from Harry Potter or something like that?

Let’s give this ONE more shot: 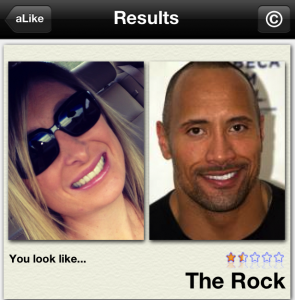 OH MY HECK. The Rock. REALLY? 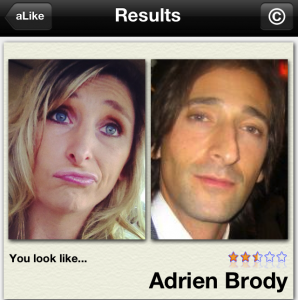 AGAIN! The ONLY duplication I get. The not necessarily attractive MAN. AGAIN.

I am DONE. This app has now been deleted.

And you bet I am going to put his picture as my FB profile pic if ‘doppleganger’ week ever comes up again.

Apparently, we have such an incredible resemblance that his photo came up twice. Out of all the BILLIONS of celebrities.

*My self confidence is through the roof right now.

*The above statement is a GIANT lie.

So sorry about misleading you with Wordless Wednesday title. There are only 295 too many words for that to be true. I didn’t mean to do that. I promise.

Cheesecake – What you may or MAY NOT know about cheesecake

I made a cheesecake for a dinner event the other night. Husband likes cheesecake. This one in particular turned out really, really good. It was a Pumpkin Walnut Cheesecake. 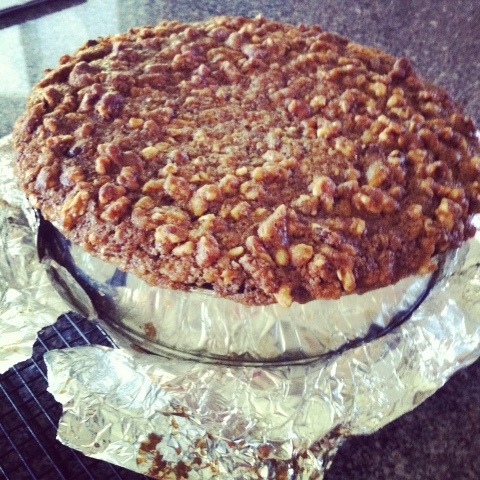 Driving home from this dinner event, a conversation took place between my husband and myself.

Husband: Why is it called cheesecake?

Husband (while cutting off my explanation): It’s not like there is actually cheese in it.

Me (trying to contain my laughter): Dude…really? Yes, there is!

Husband: Really? Well then, what kind?

Husband: Seriously? So cheese cake is mainly just a giant pile of cheese?

Me: Yeah, pretty much.

Husband: I just figured it was called cheesecake but didn’t really have cheese in it…you know like hot dogs….it’s not like those have……. 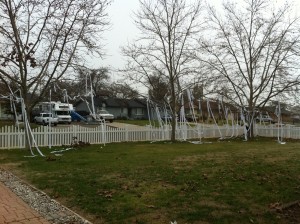 We really have a great house for toilet papering. It’s not even our house that they get, its our trees in our front yard. We don’t mind, its actually funny! Especially since I learned the best way to clean it up is to light the streams of toilet paper on fire. The neighbors aren’t crazy about this…. 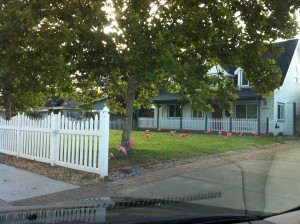 Still to this day, we are baffled by the way they did it and the fact that they were hiding somewhere in our front yard WHILE WE CAME OUTSIDE to see the four or five flamingos in our yard. We looked outside about 30 minutes later to our front lawn being COVERED! Within the next couple days the flamingos were removed in the middle of the night. I was sad to see them go….but not sad enough to go buy my own flamingo’s to decorate my front lawn with.

I’ve been forked. (in Idaho) 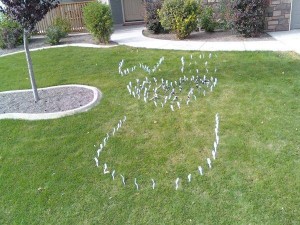 I was home alone one night and not feeling well. I kept getting text messages from a couple teenagers from our youth group. Finally, I went outside and saw our lawn had been forked. It was awesome. The girls said they took all the forks from a fast food place. I reminded them that stealing was bad! The girls helped me clean up the forks a few days later. Yes, it says We heart U!

Yesterday, I walked out our front door to a fish. 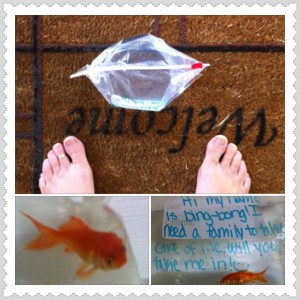 I’ve never even heard of this prank.

Problem here is I hate fish. I think they are kind of lame pets. Maybe I should clarify…GOLDFISH are pretty dumb. Unless they are food for a piraña or something….Exotic fish are cool. But not in my house. I don’t want the responsibility of keeping anyone or anything ELSE alive.

We got this fish on Sunday morning.

This was the status on Monday morning.

RIP doorstep fish. Your 1 day on our porch was nice. Your 1 evening in the fish bowl was apparently not so nice.

Betcha we don’t get ‘Fished’ again!

Every once in a while I browse the Top Searches on my blogs dashboard.

Not much needs to be said about my stellar impact on the web.

I’m just doin my part to educate the world…

Young, strong & running against the wind!

Short, quick & sweet! I received this from a very good friend.

It kinda made me cry.

1 Comment
Filed under: A Good Laugh | Tagged as: against the wind, cute video, ducks

I am busy working. And I see this little message pop up…from my husband…

So, of course I am confused (not terribly difficult to confuse me)… so I click the little linky….

TRUE STORY. Each. and. Every. Word.

So dads been actin a little crazy today, even crazier than he was yesterday. Very nervous, insecure, in pain and afraid. I feel for him. I really do. None of us could ever understand what it would be like to be told you might have another week left to live.

So he is scared. He starts talking crazy, like after 36 years he is done being married to my mom. She sticks by him and takes great care of him through all this and now HE is done! Whatever!

He believes my mom is “involved” with every man who looks her direction. Eeeeew! Men around here have no teeth!!!

So, mom has a little discussion with his cancer doctor and the nurses. They say they don’t like what they are hearing. They think we are in danger.

So….THEY call and say the SHERIFF is on his way and we better not fight them. OMG. What? Dads a complete basket case, and the cops are coming?

We panic. I tell my dad… THEY’RE COMING!

Panic some more. Dad says let’s go. He gets in a car.

Mom can’t find keys. The dog gets out. The gate needs to be opened.

I see the sheriff. He’s coming.

I move another car around to the front. I drive to the gate. I push my sick and mentally unstable dad in the back seat. I jump out of the drivers seat because I AM NOT harboring a fugitive…or whatever this would be called.

I open the gate. Mom jumps in the drivers seat.

She drives at light speed to ESCAPE! I stay at the house. I wait. Seriously, I’m ready for the cops to come down the driveway. I’m gonna have a nice talk with them. My sisters boyfriend (or ex as I am told) calls his dad. He’s a cop. He asks his dad if we broke any laws. I am a little nervous about breaking laws. Not really my thing. His dad says in Texas, we haven’t broken any laws. Well, that’s better than nothing…except we’re NOT IN TEXAS!

My mom calls and asks if the cops came yet. I say not yet, 2 Sheriff cars flew by but they haven’t been back by the driveway.

After my mom drives in circles for about 30 minutes, she calls back. The Sheriff CALLED her…..and SHE ANSWERED! Hahahaha! Who answers the PHONE when your running from the cops????

OMG! What a riot. So, my mom tells the cops that the doctor wants to send my dad to the hospital that almost killed him, twice. She doesn’t want him at that hospital. The cop AGREES with her and says the doctor is crazy.

Oh, you might be wondering WHY the cops called her cell phone…….BECAUSE……..

THEY COULDN’T FIND THE HOUSE!

Thank goodness there wasn’t a REAL emergency, we would still be waiting for those cops to find the house.