I can’t put a title on this mess…

I woke up around 2am. I tossed and turned, I was too hot but refuse to remove blankets for the fear of a robber seeing me in my pajamas…

While lying there, my mind started wandering. I was deeply concentrating on my parenting skills, career path, being about 7 days behind in my read through the bible in a year plan, despite my constant efforts and rug burns, my ability to ever really do the forearm stand scorpion is just not likely since my spine isn’t made of rubber, the fact that I have about 37 Draw Something games waiting for MY turn, BUT it was this next thing that really was a humdinger….

I have spent the last 4-ish weeks doing a Beachbody workout program called 10 Minute Trainer. Its awesome. Its P90x workouts put into 10 minute workouts focused on certain areas. The program has me doing 3 of these workouts for a total of about 34 minutes of workout time a day. Not very long, but super intense.

I am seeking after that toned tummy. I really have no desire for a six pack of anything other than abs, except maybe those glorious Lofthouse cookies with the mountain of frosting that are in the grocery store each week with a different color frosting to celebrate the upcoming holiday where you can hear them beckoning for you to celebrate with say 1 or 4 cookies to fully enjoy the First Day of Spring or National Pet Week…

So, for the first time ever, I took all my measurements and weight and all that garbage before I began the 4 week regimen and took it all again yesterday at the end of the 4 weeks. I guess I was hoping the non-digital scale would start clapping and cheering or maybe a phone call from Tony Horton saying “You really did BRING IT”…not really Tony. Please don’t call me, my husband wouldn’t dig that. And he could totally take you 1 on 1 . But, in reality, nothing happened. In fact, the scale didn’t change much. That’s where I have a bone to pick with the fact that muscle weighs more than fat. Unfair.

The measurements…oh the awkward measurements…..remember that song by Sir Mix A Lot, Baby Got Back. (If you don’t know that entire song by heart and aren’t singing it right now, then there is a chance we aren’t really friends). My measurements are not entirely far from what he mentions in that song. Well guess what? I am 5’3″ (and a HALF). So, based on his logic, I have a BIG BUTT. I had NO idea. I have never considered the fact that I had a derrière that was large in proportion to the rest of myself. 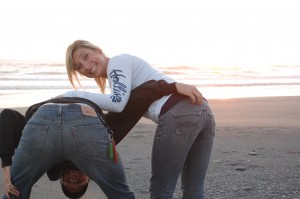 This was an entirely TOO long of a post just to say I had a really hard time sleeping last night.

Stop looking at me.

Now, what category do I put this post in?