I HAD NO IDEA IT ALL STARTS IN 5TH GRADE.

He likes her, but she like’s a different boy, but his friend said he heard that she told her other friend that she did like him…

I get a text from a sweet friend, “Did you hear about the conversation the kids had today?” (kids being her super smart, driven, sweet son and my daughter)

He likes her as more than a friend, she likes him too but also thinks she likes someone else but doesn’t really know what it even means to “like” someone. But apparently, being appointed as Queen Hula Hooper of the girls team in their “Hula Hooping Club” is a big deal.

Ya, it makes no sense to me either. But if you try to listen to the explanation of a 10 year old, that’s about how the conversation goes.

So, after the incredibly awkward ‘who likes who’ conversation and the repeated “YOU KNOW YOU ARE NOT ALLOWED TO HAVE A BOYFRIEND” chat, we settle into our post school/homework and evening schedule. The kids have a bit of down time before we have to run to a meeting and they choose to play Xbox for a bit.

Well, I am guessing that being smart, cute and witty is a pretty big plus in the 10yo girl world BUT, adding Halo player just makes the boys go crazy.

My kids (10 & 8) get on Xbox Live, (only allowed to play Live with our good friends/neighbors) and start playing with a friend. Well, that friend happened to have 3 other 10yo boys from school over.

I was listening to all the silly chatter and giggling, yes, from the boys and it was HILARIOUS. The audio was working but they couldn’t hear us, so all we were hearing was them “I can’t hear her. She’s not there. Maybe she can’t hear us. Is she there? Should we call her? Maybe she is calling us?”

‘Why did you kill me? Who has the sword? Who is the juggernaut? No, that’s me, don’t kill me…’

After a while, the boys had to stop playing. Shortly after that, the doorbell rings. 2 of those boys wanted to ‘say hi’.

I answer the door.

CUTEST BOYS EVER in their football gear. “Hi, is Lexi here”

Me: “So, you on your way to football practice?”

Me: “Well, nice to see you boys, have fun at football”

As they are walking off the porch, one boy giggles to the other saying “I didn’t know what to say” 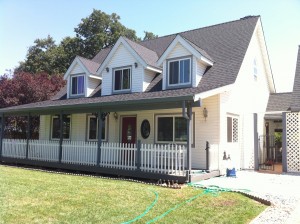 See the top right window? Can you picture the fairy tale conversations taking place at night?

I can’t NOT post this! The moms left for just 30 minutes. This is what took place while we were away!

These are our great friends who are visiting us from Idaho. The husbands thought pics and video would be fun. Using only iDevices (teehee)! Pics and videos were recorded with an iPhone4 and then the video was created with iMovie on the iPad2.