It was Lexi’s (our 10yo) turn to make us dinner. She contemplated for days on what she was going to make. I told her to think of the main course and what type of meat she wanted. At first she decided baby back ribs. I talked her out of that because its such a lengthy process and I don’t want her BBQing yet….

Then she chose chicken legs. She didn’t care how she cooked them, she just wanted chicken legs. So, we go to the store to get her legs. She ponders the packages of legs and says “WAIT! What are those things called…you know….the little birds…they’re cute….little…” I finally realize she was talking about Cornish Game Hens.

SHE WAS SOOO EXCITED.

Her mind was made up. 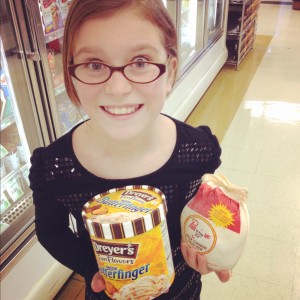 A cornish game hen for each of us and Butterfinger ice cream for dessert.

I had to CONVINCE her that we needed a veggie to go with our own mini birds. She chose Corn on the Cob. I was hoping for something green, with a bit of nutrition, but hey, it’s her night.

Then I told her she should do some sort of starch…like a potato, noodle or rice side….she suggested “banana’s”. Ummm, no that’s a fruit. She suggested “corn”. Sure, a side of corn with our corn on the cob. UGH. This was going nowhere….I reminded her POTATO, NOODLE, RICE…..

She chose a side of mashed potatoes.

This meal was becoming more fattening by the second…with little nutrition….

But, all her choices where acceptable and I was not going to thwart her plans.

She prepared the birds… 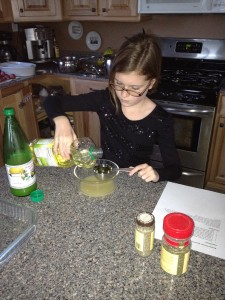 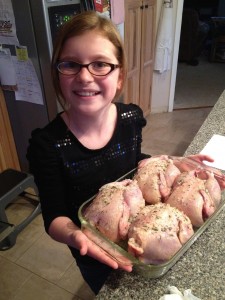 She mashed up some red potatoes, by hand, adding a bit of sea salt, butter and milk. 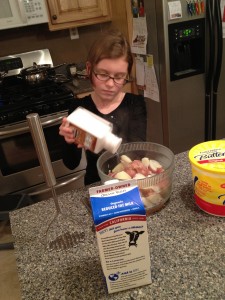 She served us portions that could feed our entire neighborhood. 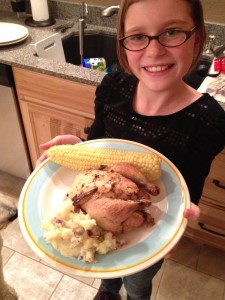 Cuz everyone needs their very own bird on a plate once in a while!

It was delicious. It was a HUGE learning experience for Lexi. She appreciated the flavor of the meat BECAUSE she made the seasoning. She kept asking if we could taste the lemon in the meat.

Brayden (7yo) gagged each time he dug into his bird to get a bite. He reminded Lexi that he liked the flavor, just not the greasy, gooey mess…. Made me laugh each time!

Great job Lex. Another successful Kids in the Kitchen experience.

And for the record, she called them Canadian Game Hens all night. But, that was better than what Brayden called them, Hornish Gain Hems.